Name mola, from Latin means «millstone» also known as “sunfish”, «moon fish» or «swimming head». In Polish, it is named “samogłów”, meaning «head alone», because of it shape.

The Mola Mola is the family of the Molidae. This family consist of 3 genre: Masturus, Mola and Ranzania.
The Mola is the heaviest bony fish in the world. The adult Sunfish has an average length of 1.8 m and a fin-to-fin length of 2.5 m. The average weight can be from 248 to 1000 kg. The maximum size of these amazing fish can be up to 3.3 m in length and 4.2 m across the fins, weighting up to 2300 kg!
The body of the sunfish is compressed and ovular. They have a relatively long life and keep growing their entire life.
The Mola Mola have two larval stages. Larvae measure about 0.25 cm. Juvenile grow at a rate of 0.02 to 0.42 kg a day. Females are larger than males.

The Mola Mola, are found in the temperate and tropical waters of the Mediterranean, Atlantic, Indian, Pacific Oceans, off the coast of Southern California, Indonesia, the British Isles and the Northern and Southern Isles of New Zealand.
They prefer the open ocean and mainly swim alone, but often are seen near kelp beds and deep coral reefs, in pairs or groups when being cleaned from ectoparasites from their skin by wrasses and Emperor Angelfish.
They swim near the surface, exposing their top fin, and might jump out of the water. They are usually shy, swimming upright, close to the surface to re-warm their core body temperature after diving in colder water.
Sunfish are most often found in water warmer than 12 °C as longer times spent in water at temperatures of 10 °C or lower, can lead to disorientation and eventual death.
Some Molas can swim 26 km in a day, at the speed of 3.2 km per hour. Sunfish can dive to depths of 500 m.

The Ocean Sunfish diet, consist’s mainly of jellyfish and plankton, which they consume in large amounts, to develop and maintain their size. They also consume mollusks, seaweed, salps, squid, crustaceans, small fish, fish larvae and eel grass. Because they must consume a large amount of prey, their presence in an area, may be an indicator of nutrient-rich waters. 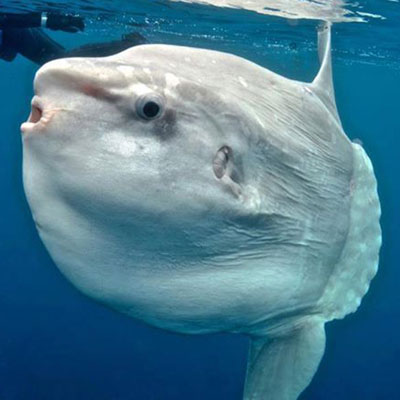 They are scale-less and have a thick, rubbery skin and irregular patches of tubercles. Ocean sunfish are mostly a mixture of dark grey/ silvery grey colour. They have a white belly and sometimes have white spots on their fins. Adult Molas have only one gill opening on each side, which is located near the base of the pectoral fins.
The body is flattened; it has a long oval shape. The pectoral fins are small and fan-shaped. They can reach up to 3.2 m in height. The spinal column of a Mola, contains fewer vertebrae. Its skeleton contains large cartilaginous tissues, which are lighter than bone, allowing it to grow to super big sizes.
In the course of its evolution, the tail of the sunfish disappeared, to be replaced by a lumpy pseudo tail.
Their tough, elastic skin is covered in mucus which can be up to 7 cm thick.  Mola also have the ability to change skin coloration from light to dark, when threatened. Lots of parasites reside on the skin of Mola Mola, so it needs to seek areas where cleaner wrasses and other fish are, which remove parasites from the skin. In the tropics, Ocean Sunfish bask on their sides at the surface, allowing seabirds to feed on parasites on their skin.

Little is known about the mating of ocean sunfish. Between August and October they spawn off the coast of Japan. Other spawning areas are in the North and South Atlantic, North and South Pacific and Indian Ocean.  Females can produce 300 million eggs each breeding season. The Mola Mola eggs are released into the water and fertilized by sperm. Their eggs are very small; with a diameter of 0.13 cm. Adults have the potential to grow more than 60 million times their birth size!
The lifespan of ocean sunfish is unknown. A member of the same family, sharptail mola can live 82 to 105 years.

Adult sunfish have a few predators, such as: sea lions, killer whales, sharks, blue fin tuna. The Sunfish often dive below the thermocline to avoid predators.
The meat of the ocean sunfish is considered a delicacy in some Asian countries. Some parts of the fish are used in traditional medicine. Sunfish are accidentally, but frequently caught in drift gillnet fisheries.
Because its main food is jellyfish – plastic bags and litter are threat to them.

The Mola Mola are no threat to divers. Here in the Alboran Sea, where Black Frog Divers are located, on the beautiful Costa del Sol, we do see them often during our scuba dives, but there are other very interesting creatures to see.

If you haven’t seen them yet and you wish to, please visit us and book your dive!