Few days ago we had the luck to scuba dive with a mola-mola. At fist still and calm....it got suddenly fast and very shy. We were a grop of four divers, exploring Marina del Este. We were approcing Freggle Rock, our favourite diving site!

Mola- mola is a very strange diving creature, looking almost like a nature mistake.  It is flat and round, that is why they call it also sunfish or moonfish. Even its eyes are round and unespressive. As soon as it sees someone getting close, it stares: curios it keeps gently swimming and breathing, rolling on itself. It is very difficult to get close to it for more than few seconds. Even if the shape doesn’t look very “aquadynamic”, it takes a fraction of a second to disappear from your sight.

More and more often it happened to see it in Marina del Este.  Especially in the early morning, when the sea is calm and people are still sleeping, or when the water is a bit colder and there are less divers, it is easier to swim into it.
They are generally easy to find to a depth of 18-20m.

Check our Youtube video..it is just few second long but.. it worth to be seen! 😉 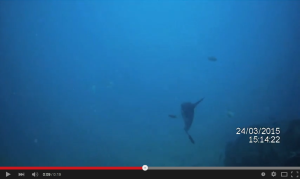 The Mediterranean Sea
Scroll to top